The Dutch into the world. (history backgrounds)

The Netherlands were never an isolated island in the economic, social and political turmoil of history. During some periods in these last 1000 years or so, this was an immigration land, with people coming in by their hundreds of thousands. And I'm talking 16th and 17th century century now, not just recent history.
And there were periods were people from these lands swarmed around all over Europe and the world.
With the buttons on the left, in the 17th century block, you can read about a few of the regions affected (but the list is much much longer).
People left for different reasons, under different names. But bear one constant factor in mind : only desperate people leave their homeland for a dangerous voyage into the unknown.
Roughly, there were three major periods of Dutch diaspora :

First, one remark. "The Netherlands" what does that mean ?
It's common practice to equal The Netherlands and Holland. But Holland is only a part of the actual Netherlands, and these Netherlands are only a part of the historical Netherlands on the starting point of their reason of existence : the Eighty Years' War of Independence against Spain (1568-1648). Those Netherlands being roughly the actual Netherlands, Belgium, Luxemburg, northern France and a few patches of Germany.
If you think this is confusing, you're very right. Confusing as well for many Dutch and Belgians, especially the Flemish who speak the same language as the Dutch. If people know anything at all about their common history, the view is very often distorted by later events and periods.
Simplified, you could see it this way : what started in the 1560-ies as a common revolt, turned into a bloody civil war between North and South, with all the horror and destruction, streams of refugees and traumatised memories. Then and in our times, just the same. 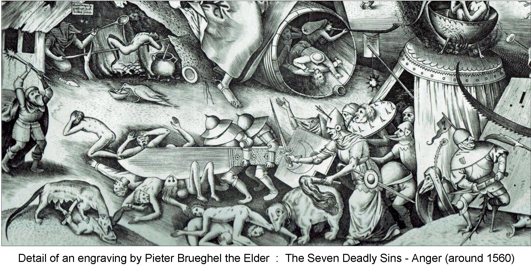 As explained on the pages sinking land and urban society, the ignorance of man led to a chain of events resulting in ecological catastrophe and overpopulation. Especially after a series of apocalyptic floods, at least worsened by human activity, people started to leave the low parts in their thousands.
Not as refugees only, some where invited because of their expertise : how to build dikes and canals, how to make new land from marshes and wetlands. They helped develop large areas in north and eastern Germany, Poland, the Wash in England, in Normandy and Brittany, and along the Gironde in southern France.

The United Netherlands, or the United Seventeen Provinces, as they were also called around 1550, where much larger than the Netherlands of today.
The north, with Holland, had already the largest sailing fleet of Europe.
The south, now Belgium and northern France, was the richest and economically most developed part of Europe north of the Alps. With Antwerp, by far the largest Dutch city, the financial and economic centre, and Brussels, where the government of the Netherlands resided.
It was in these densely populated parts of the south that Protestantism spread first. Rapidly and profoundly. To the growing dislike of the very Catholic king of Spain, who by marriage and inheritance also ruled the Netherlands.
What's more, to the horror of the local elite the king wanted to impose modern centralised government and taxations. Now, that was something this collection of pretty independent regions and cities absolutely did not like. And as the king formally could not impose taxes without approval of sort of a representative parliament, he had a problem. But what he did have was his strong military arm. As usual a recipe for serious trouble.
Basically what happened was that this Spanish ruler completely misunderstood his subjects, consistently taking the wrong decisions, and gradually butchering his goose with the golden eggs.
Religious and political repression, unrest, more policing, ever higher taxes to pay for this policing, revolts, more repression, war and destruction. A gliding downfall of production, trade, banking and business in general.
In short, the South remained occupied and a battlefield. And after the fall of Antwerp in 1585, that part (now Belgium) was ruined, with more than half of the surviving population fleeing, mainly to the north.
That North (now Holland / The Netherlands) became free and independent : the Golden Age of Holland in the making.
Towns like Amsterdam boomed with a giant influx of people, capital and knowledge,
Consider that around 1600 about 40% of the population of Amsterdam consisted of immigrants, mainly from Antwerp. With them most of the trade, banking and intellectual elite of the south.
In other towns even a higher percentage of refugees. Like in Leiden, some 70% of the population, after a massive part of the Flemish textile industry moved there.
Many of these hundreds of thousand of people were desperate. Many would sail out again to the four corners of the world, with only a small chance of ever making it back...
More on these 16th century troubles.
Anyway, it was a combination of factors that led to a sudden expansion that startled the world. With the "Dutch" exploring, settling or creating bases in North and South America, the Caribbean, (South) Africa and all over Asia, in India and Sri Lanka, Indonesia, China and Formosa, Korea and Japan.

The last two centuries saw waves of Dutch emigrating to Canada and the USA, South Africa, and Australia and New Zealand.
Mainly out of poverty, lack of land for farmers, and lack of economic possibilities in general. In the 19th century also mixed with religious motivation, when large groups of settlers left for the American Midwest.
Dutch emigration to Canada peaked after the Second World War, partly because it were Canadian soldiers who liberated most of the Netherlands in 1944-45. Today close to one million Canadians supposedly have a Dutch connection.
In the Dutch collective memory South Africa takes a special place. Cape Town was founded in 1652 as a support station for ships to the east, but gradually a thriving Dutch colony developed there. Even after the region was taken over by the British, the Dutch language survived till today in the form of "Afrikaans".
During the times of apartheid, which was broadly disapproved in the Netherlands, the Dutch had very conflicting feelings, and emigration into that direction virtually stopped. Nevertheless, most Dutch children still know South African songs in Afrikaans (mainly because it sounds so funny for us).